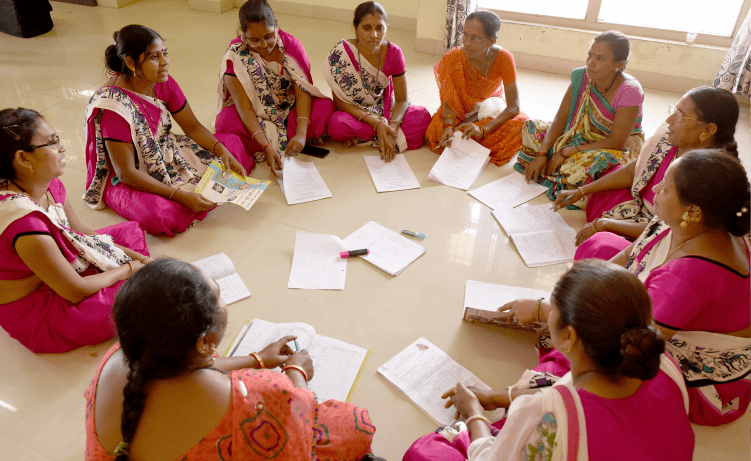 Dharmisthaben is a leader of a Self-Help Group at a remote village – Kahanva Banglawago – in Jambusar Block (Bharuch District of Gujarat). She was identified and trained as Community Health Volunteer – Aarogya Sathi (health companion) -under the Health and Well Being program of Aatapi Seva Foundation.

Banglawago is remote hamlet of Kahanva village where Anganwadi functioning and Mamta Diwas (Village Health and Nutrition Days) are irregular. Because of her constant visits to antenatal and post-natal women of her village, the pregnant women of her village have started approaching her for any support they may need.

During the lockdown period, induced to prevent population against the deadly COVID pandemic, she took upon the charge of identifying and distributing ration and safety kits to most needy pregnant women, malnourished children and persons with disabilities. These kits, supported by Aatapi, were aimed at the most marginalized groups, who were not in the social safety net or not eligible to receive the rations announced by the Govt., or required more to meet the needs.

She continued to be in touch with pregnant women of remote farms during the lockdown, and brought to the notice of local health worker about non availability of iron folic and calcium tablets for ANC women.

Mamta Diwas was stopped since Lock Down -1 and remained suspended till April. It was only in month of May that Mamta Diwas were resumed. Dharmisthaben pitched in for mobilizing women in her area but received communication through ASHA that the same was cancelled at the last moment by the ANM. She continued conducting awareness sessions with pregnant women who had gathered on that day. However, she had to let them go as neither ASHA nor ANM came in. With support of Aatapi team, she raised the issue of cancellation of mamta diwas with the PHC Medical Officer. Immediately, the nurse was asked to reach the village to undertake immunization.

On the same day she addressed the problem raised by 7th month pregnant women who was not feeling fetal movement for two months but did not tell anyone as they did not have vehicle to go anywhere during lockdown. Since the ASHA was not well, immediately Dharmishthaben took her to the PHC, from where she was referred to to CHC, Padra, where they identified that foetal movement was indeed less and baby was underdeveloped. Further treatment was recommended for the lady, probably saving her own and the unborn child’s life through timely action by Dharmishthaben.

Shahina, another young energetic girl from conservative family where her movements are closely monitored, functions as Aarogya Saathi with Aatapi. Her village, Dabha , is still under strict lockdown because of COVID 19. Inspite of death of her grandmother, she reached most needy pregnant women, identifying malnourished children and put up a strong case distribution of kits for women and children of Raval and Devipujak samuday – the most marginalized communities in the area.

She closely followed up with a young pregnant woman who was not aware about her pregnancy for three months. Her HB was very low, her economic condition was very poor, did not understand Gujarati, and there was no one to take care of her. Shahina is currently supporting her, supplying and encouraging her for regular intake of iron folic and calcium, which has helped in improving her Hemoglobin status.

Both these stories, and many such of valour and concern, clearly demonstrate the need and impact of generating community based and community owned processes for care of the most marginalised and vulnerable. While the ASHA and to some extent ANMs also belong to similar geographies and community, community watch over their weakest and vulnerable during such emergencies is definitely the way out to address our high levels of Maternal and Infant Mortality indicators. With impending long-term vulnerability to COVID-19, self-sustained community action is the need of the hour and more resources need to be diverted to ensure the same.